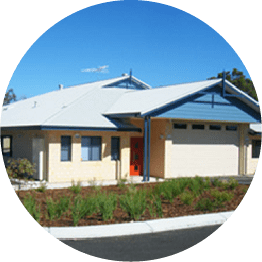 In 1984, a day centre for people with physical disabilities began behind St Patrick’s Cathedral. This service was run by volunteers and open 2 days a week.

The old homestead, too small for its new purpose, was demolished after white ants were found and major maintenance was required.

The new purpose built centre alongside the old homestead was officially opened in 1991. Major fundraising for the building came from the Lotteries Commission of Western Australia, Home and Community Care, community groups and the generous people of the South West.

The Leschenault Day Respite Centre commenced in April 2002. Their new building opened in March 2009 by the Governor of WA, Dr Ken Michael

The Youth Service providing activities for young adults with disabilities commenced February 2002 and operates on Mondays, Tuesdays and each Saturday of the month.

Dementia specific programs commenced in 2010, and to meet the growing needs of the community and Overnight Respite services offered from 2012.